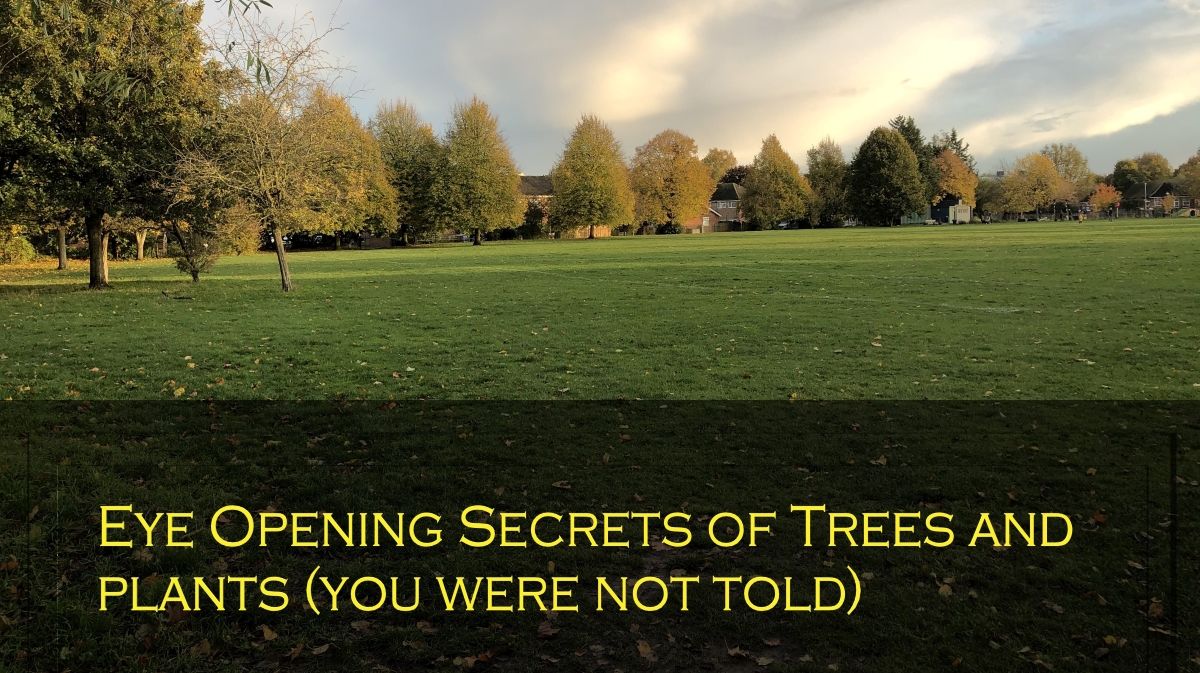 Secrets of Trees and plants that many of us don’t know even now. This article makes an effort to unravel such secrets. We do not think so deeply when we damage trees and plants. Hopefully this will give us a hint of respecting them.

How do plants & trees communicate with each other?

Plants communicate through their senses.  In other words (by sending signals) through roots or somehow we learn about that method used now. An observation in this area indicates that plants also use this method of communicating with clicking sounds.

Can plants & trees move from one place to another?

The answer is yes & no. Yes because they, in the form of seeds travel to places even from the mother trees. That is the reason we come across many types of trees in a place where they aren’t usually seen.

No, because they can’t move without human & other living creature’s intervention by us removing them from the roots. Then replanting them to another place. It may also happen that a small stem of a tree fell due to a heavy cyclone or a storm. It eventually ends up in the right place where it could propagate itself and then it starts rooting.

Although you could imagine them like kind of elastic creatures. That doesn’t need to move its body by lifting its root over the ground and then walk like a human. They extend their roots and they still reach quite far.

Please note that the creepers travel long distances within the forests as well. Although the tree itself can’t lift its roots and start to walk, its roots travel distances. They also have a good communication network with other plants and trees.

We are moving towards the future. We must give up the idea that trees and plants are nothing but just something you use or abuse. Plants have life, they feel the pain, have families, they cry, and they feel emotions too. So let’s advance our thinking.

We are taking its life away because it doesn’t appear to us that it looks like it’s crying or afraid. Also, we agree with the fact that we consume Plants its fruits, and vegetables because that’s our sustenance.

In the same way, as we also consume meat. It’s easy to blame others for eating meat. Let’s not forget that when we eat vegetables and fruits we are also taking life.

Do trees and plants feel the pain?

Yes, they do feel the pain. Plants can actually cry?

An article by livescience reports an amazing action taken by a tree when a tree is under an attack by some microorganisms that can cause disease. We get to learn that a leaf sends an emergency signal to the roots.

The roots react and release a specific acid that attracts good bacteria that can benefit the tree. This research is not a new observation it’s more than 10 years old; in fact, it was in 2008 that makes it 13 years old.

An experiment on tree leaves you may already know

The more simple explanation that we can present is when a banyan tree’s leaf is cut, you see it pours out a white milky liquid that is sticky. Since the cutting the leaf has left a tree injured so have this liquid out. In a day or two it dries the wound and it changes the colour to dark brown and or blackish.

Even when the stem of the tree gets bruised, it releases a liquid or a substance that helps the wound get healed faster. It’s a serious thing which many of us won’t have imagined. However, it is true and has come to light that even pulling out of a root can make a vegetable scream or cry. It’s simply that we are unable to hear or see it.

Do trees have emotions? Plants do have feelings. They feel afraid and sense danger. If plants didn’t have senses how could they sense danger?

3 known experiments in the field of plant intelligence

Experiment no 1. : Italian scientist Stefano Mancuso’s experiment on Plants sheds light on the memory of the plants. He also mentions “Plants can process information and make decisions, all in the absence of brain”.  Stefano Mancuso Studies plant intelligence.

‘Plants intelligence is manifested in their extremely advanced sensitivity. They can detect over 15 different stimuli, such as light, gravity, electrical and magnetic fields, chemical radiance, heavy metals, and others.’ The European Commission has an article on it.

Experiment no 2. : ‘Cleve Backster a former CIA person in the Year 1966 performed an experiment using a polygraph machine on a plant. He published his research in 1968. The results were astounding. Contrary to popular belief we learn such impressive things about plants, I believe that many of the vegetarian friends may not know.

He conducted an experiment on plants with a polygraph machine testing them. Cleve also observed an amazing behaviour output of a polygraph test on plants when it was watered. It was also noted when he intended to burn the leaf. This gave him proof that plants could identify and behave in a certain manner to his thoughts.

It reveals through his experiments that plants can sense fear & intentions. A polygraph test especially on the experiment on shrimp to be put in boiling water. Taking the polygraph readings of 3 plants that witnessed this incident was done.

This conclusion provided us with proof that an abrupt or unexpected death around them might draw out a strong response from the plants. ‘

Experiment no 3. : The scientists from the University of Tel Aviv found out that plants throw out a high-frequency distress sound in certain situations (environmental stress). In our case earlier we learned it’s a distress signal when they are under distress.

We also come across an experiment of a tomato stem & a tobacco plant. When a tomato stem was cut, it emitted 25 ultrasonic distress sounds. You can check this there was also a story in Dailymail news

What determines if a living being has its senses or not?

We have our sensory organs like eyes, skin, ears, nose, and tongue. So we as humans are aware of such sensory organs because we have them. We can relate to animals and birds since we have seen them around us.

The Best example is in Humans that if one of our senses fails or stops working then we are slowly able to use another sensory organ in a high capacity. For this reason, we get to watch and hear the life stories of people. One of them was of Ben Underwood, a Blind boy, able to see through making clicking sounds.

Some people’s sense of smell increases or at least becomes more accurate than others. People are able to tell when the touch the surface and understand what it could be.

What is a sense?

This is what we get as a definition on Google search “a faculty by which the body perceives an external stimulus; one of the faculties of sight, smell, hearing, taste, and touch”

Can a living being feel pain without the senses?

Feeling of pain is subjective based on each situation. We do not have extensive research on all living organisms from start to end. A slow and steady advancement have gone through over the years. It is in terms of what benefits us as humans and that is what we know & connected to the Eco system.

International Association for the Study of Pain has defined it as “An unpleasant sensory and emotional experience associated with, or resembling that associated with, actual or potential tissue damage,”.

Should pain and its intensity be the criteria to decide on consuming it or not?

It may not have been fully understood or researched and this doesn’t indicate that it doesn’t exist. There are people who are unable to feel any pain. We do not take them for granted and harm people because they don’t feel the pain.

We know that congenital insensitivity to pain exists in humans. However, we give more importance to humans, animals, and birds that we see, have movements, and hear their voices.

What do our own intellectuals have to say about plants, pain & our menu?

While doing our research we come across a number of things. We can say that we selectively choose to close our eyes on what we perceive as moral or immoral.

A Plant that is not watered in a pot and its leave shrink and the stem bends itself. Now imagine a human being not given water or food and the body condition of humans shrunk and feeble.

When these plants are watered again and taken proper care with manure, their stem look healthy and it starts to grow nicely back again. Same way we humans after many days of hunger or thirst when we get sustenance we tend to feel better in a couple of hours it self.

What we learn from Suzzane Simrad about forest trees?

Professor of Forest Ecology (The University of British Columbia) Now there is a proof that we never had, like we do now. Trees help each other as well. For those that think plants & vegetables are ok to be eaten and used to create furniture and other useful items have something to give a second thought.

What does some of the well known people in the field of science tell us about the trees?

It is truly the secret life of trees. Trees identify their kids too. They help them too. By trees having kids we mean their seedlings that ripe and fall and tiny young saplings come up near by them. Sometimes they also go far of places due to wind and other living creature’s interventions.

Valentin Hammoudi explains us in his Ted-Ed presentation video how plants use small thorns, spines and prickles to save itself from bugs. Thorns or spines prick herbivores and it discourages them . Hence they would leave such plants alone.

As the time passes through and we advance our studies, research and observation on plant intelligence. It would be interesting to see what eye opening facts you could get to hear about trees & plants.