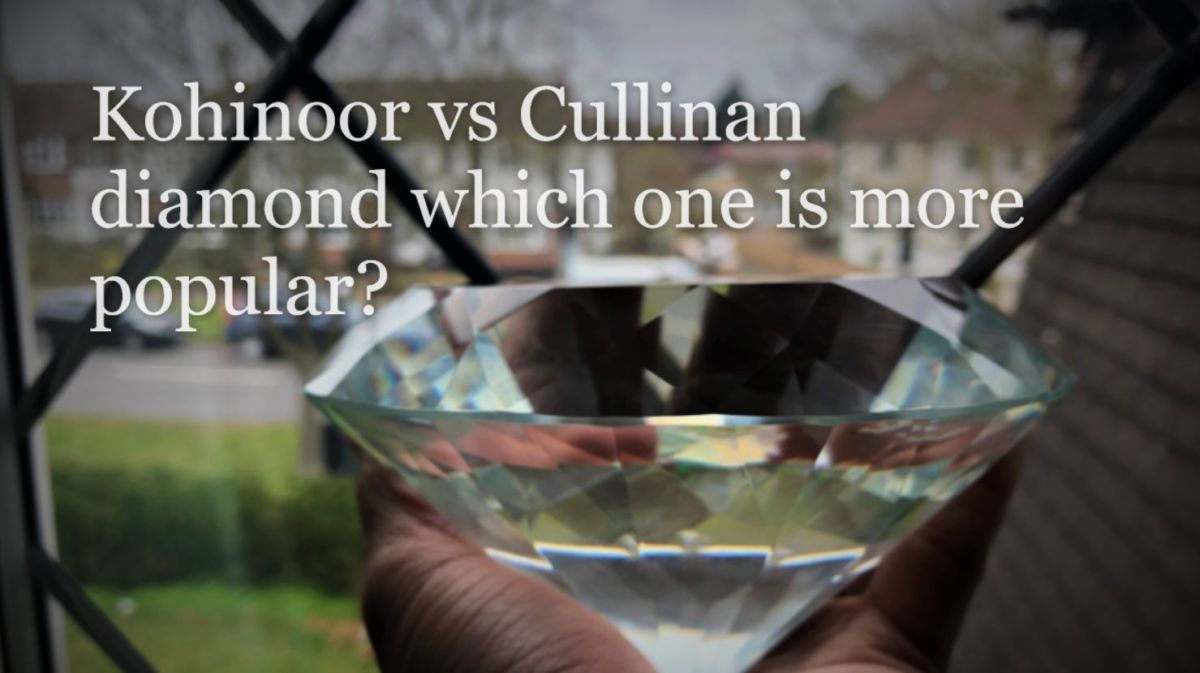 Who wins the title of the biggest diamond in the world?

None of them can win the title of the biggest diamond title in the world. Sergio is the biggest diamond found that outweighs them, having 3167 carats and the Cullinan diamond was 3,106.75 carats. Kohinoor diamond is nowhere close to these two. Kohinoor weighed 190.3 metric carats on its arrival in Britain.

Which is the most talked-about diamond in the world?

We decided to compare the two diamonds to know which one is really famous. We get the results and they are clear. Still, the popularity of the Cullinan diamond is increasing as the people slowly learn about it. So we checked the 5 years and also since 2004 and still the results were amazing and kind of clear as expected.

This Precious stone Kohinoor has different stories of royal greed, overpowering, and betrayal associated with it. On learning about it from various sides of the same story of this stone we get the following gold or we can say a diamond nugget.

We listen & learn from a story from an Indian perspective. What we learn is …….. It came out from the mine of Golkunda from the state of Andra Pradesh in India. A book of Baber ruler known as Baber nama has its information as well.

Claim on if the British stole Kohinoor or the story has a different side to it. On checking the BBC article on the myth about Kohinoor we learn about another perspective to the whole story.

What William Dalrymple had to say on Kohinoor that we can learn?

William Dalrymple in his speech mentioned a lot of important things one of which is ‘The Mythology of this diamond is largely the result of the short report written by young Theo Metcalfe the son of Thomas Metcalfe.

We learn from this speech is that before 1750 we haven’t been able to find a single reference when its first mention in the manuscript that Michael Axworthy found in Iran’.

Observations on this Story gives a reason to think

It is often observed that while explaining the historic events that have some connection to a particular materialistic benefit or profit, the explanation often varies. The numbers in the story also change, the dates, the place, and even the people change.

Not only this but also the behaviour of one king or a ruler towards the opposite party differs from each storyteller’s perspective. That is if they belong to rival nations or parties involved, however, this may not always be the case.

When you will look for the dates or weight you will find variations in the dates, for instance, some mention the discovery of Kohinoor in the 13th century and some others gave 16 century. So this variation gives clear evidence that there is possible misinformation going around online to gain benefit.

We learn that there’s plenty of action around this diamond. The game of Greed, torture, murder, blackmail, thuggery, Clever acts, and much more actions and emotions have gone around the life journey of these diamonds.

Why did India ask for a Kohinoor diamond from Britain?

It has many attachments to this diamond although from different angles. The reality is somewhat different from the narrations of various stories.

Knowing and acknowledging that this diamond has many sad endings where it went as per the common knowledge or superstition if you may call it.

Why some of the Indian storytellers think Kohinoor must be claimed from Britain?

It simply is due to the history and the place believed to be its place of discovery. This however is challenged by other critics, some stating it was not mined but was found underwater. Some claimers also claim other stories that satisfy their own narratives making it a part of the religious myth or stories.

Why did Britain refuse to hand over the Kohinoor diamond to the Indian government?

Britain has its own reason for not handing over the Kohinoor diamond to India. It has many other beautiful and precious jewels to its beauty among the crown jewels. Each has its own story some of it is known and some unknown.

In an interview a bit of what David Cameron had mentioned when asked about the return of Kohinoor that, “If you say yes to one, you suddenly find the British museum would be emptied”.

Who has more right to hold the Kohinoor diamond?

It is in fact a topic of debate between different nations. Especially countries of Central Asia such as India, Pakistan,Bangladesh, Iran, Afghanistan, and or even Burma were a part of India before Indian independence. Now claim from post-Independence India creates a conflict between its neighbouring countries.

Surprisingly not many of us know Burma was a part of India ten years prior to Indian Independence. Present India is not what it was prior to or during Independence. Hence each narrator has their own version of the claim.

What is common between the Kohinoor diamond and the Cullinan diamond?

Both are in the collection of crown jewel. Cullinan diamond was cut into many pieces since it is considered as one of the biggest diamond ever reported.

Where was the Cullinan diamond found?

What was the weight of Cullinan diamond when found?

It weighed around 3106 carats. It was cut into 98, 97 or 96 small and 9 large separate diamonds there is a conflict between these two types of information. The information on small stones out of Cullinan diamond. Capetown diamondmuseum has 96, RCT has 97 and Joana Hardy (Fine Jewellery specialist mentions as 98 small stones. ).

What if Cullinan diamond was chucked and some other miner picked up and wasn’t given to the manager?

The story would be totally different. Although this is just a guess based on the stories of the old, we can say that it would’ve been stolen, sold to another country, disappear mysteriously, ended up in high security museum, owned by some other royals, or in some religious place. If this was mined by a different business merchant then its life journey would be different.

Characters of the story behind Cullinan & Kohinoor are as follows

Kohinoor is considered as the most famous and one of the biggest diamonds in the world by many.

Every side of the story have their own versions (Especially the sides that are most connected to it). So Indian side has its story of it 1: being found in the kollur mine.

Kohinoor travelled to many places from Central Asia to the Britain

Results of our comparison indicate the following Conclusion

Kohinoor diamond by far is popular in the Central Asia and the East Asia. Cullinan diamond is more popular in the West including Africa, Russia, Canada & Americas (USA & South America).

Due to time period when there were kings and rulers ruling the nations, Kohinoor has a rich history and more stories as compared to Cullinan diamond. Cullinan diamond was much bigger than Kohinoor.