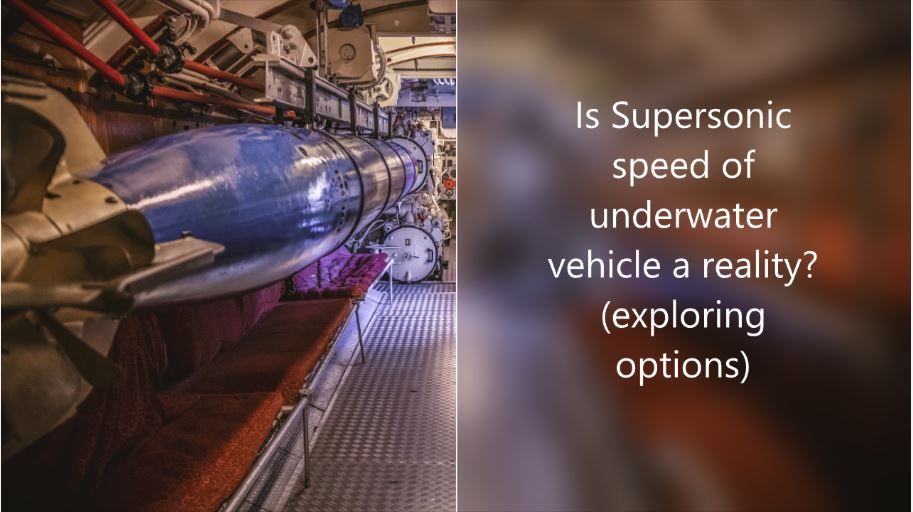 There are certainly underwater supersonic vehicles. However, they are not an exact vehicles that carry passengers.

We may come across missiles that some nations around the world test. However, there has been no release of any news related to supersonic passenger underwater vehicles.

What is a supersonic speed?

Supersonic speed is faster than the speed of sound. Fighter planes is what comes to mind first when hear the term supersonic. Even Space shuttles cross the sound barrier as their speed crosses Mach 1 to Mach 5.

However, there was a commercial passenger airliner known as concorde which was supposed to be travelling at a supersonic speed.

As per telegraph we learn that it was retired due to the cost involved in flying the aircraft. It took its last flight in 2003.

How much fast is the supersonic speed ?

Faster than 768 miles per hour. They are known to us in Mach numbers. It means any vehicle or flight faster than 1 Mach is supersonic. A bullet from the gun also travels at the supersonic speed breaking the sound barrier.

Is there a supersonic road vehicle too?

Yes, bloodhound car is designed to be a supersonic speed car with an effort to cross of 1000 kilo meters per hour. It comes to around 621.371 miles. It also has been successfully tested at the speed of 628 mph.

The Bloodhoundlsr team is targetting to cross 800 mph barrier in 2022 in a record breaking attempt.

What is an actual speed of sound?

The results of the speed of sound varies when we search for this term. Sites we go through have slightly different results. Claiming on the speed of sound. However what is learn through our research is the most closest is 768 miles per hour.

Speed of sound could vary if we are in space and if we are in the earths atmosphere. Sound would travel back faster when we are closer as compared to farther.

Do sound waves travel faster in air or water

What would be the speed to sound in Space as compared to underwater?

In space sound wave speed is zero. As sound needs a medium to travel or particles. Although you may have heard the sound of sun or mars etc. It is the sound heard by a space exploration vehicles.

What is the Speed of sound under the ocean?

The speed of sound under the ocean would differ due to the density and temperatures.

Drawbacks of a supersonic underwater vehicle

There are a plenty one of which is limited mobility due to high speed.

Harmful to the ocean creatures ( for whales, dolphins, large turtles, sea lions etc.). It could destroy the ocean conservation areas.

Issues in detecting the vehicles due to its speed underwater. To avoid hitting any obstacles a sonar could be a huge challenge as it can’t go to that speed.

Huge issues in stopping the vehicles at that speed due to the drag. Glazed Ceramic coating on the outer layer could be the option.

Can supersonic underwater vehicle be used for international trade?

Import & export vessels that take months to go from one part of the world to another could be soon replaced if this technology becomes successful.

News with regards to such information has not been published or marketed for the masses. It would definitely create a stir if such vehicles come into existence.

However the possibility of high risk is always going to be a part of such transport facilities.

One user commented about ‘tunneling through the earths crust’.

(Sounds quite crazy & sarcastic but good sense of humor)

Exploring the topic of supersonic underwater vehicle teaches us this

Supersonic vehicle project require enormous amounts of funding to work on to run as well as to maintain them. We have seen 3 instances where issues arising is financial viability at the top. Second is the risk factor (risk of life). Third its usage- if masses can use it or it could be a thing a very few could use.