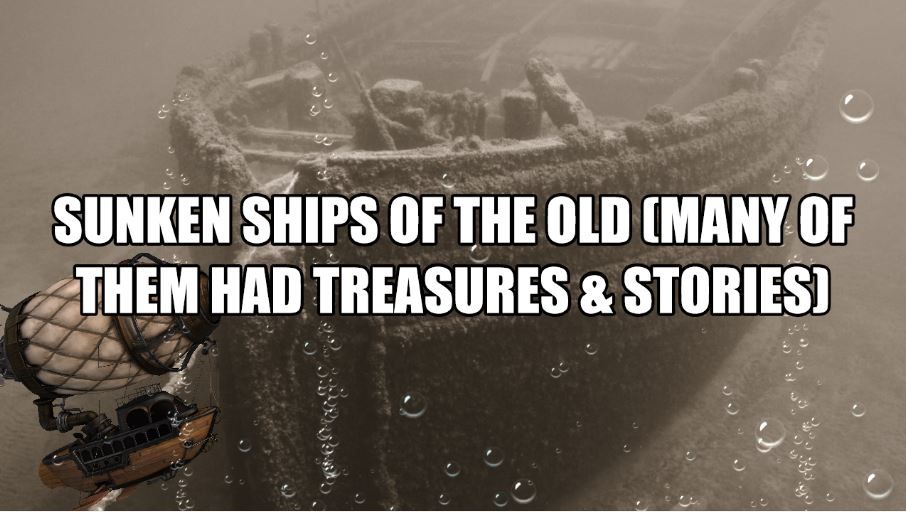 However, not all may have sunk with the treasure that you may think of. There are also those that have been historically significant for the countries it belonged to. It is also noted that there are some ships misunderstood as 2 different ones due to names, similarities etc.

These were known by people or we perhaps identify them as different ones. It is crucial to identify & learn before you decide to go on with an expedition or so.

In 1768 – HMS Endeavour was the one that brought Captain James Cook to the coast of Australia. Had 94 people with 18 months provisions, A ship sank years later and its wreckage is not yet been found until the last time we researched. We do not know if it may have been disintegrated since it was wooden. Never know!

The Griffin (confusion of names)

We also find a bit confusing here is the number of ships that were known by the name Griffin either it be Le Griffin, the Griffin, or HMS Griffin.  Whichever the ship it was that had loads of treasure had sunk and we know that through some of our known sources.

Titanic which was also a film by James Cameron

RMS Titanic was also known as the unsinkable ship. We remember Titanic because of the movies which made the story even famous. As per the reports from Independent news in their article dated 23 July 2000-

‘It had come to light that was a shipment of the diamonds that were being brought back then to the New York which had a value of £200 million pounds approx as of the year 2000’. We do not know the exact value in the year 2020.

There were more than 1000 passengers that lost their lives in the ocean. There were emotions behind these remains. To those whose loved ones lost their lives. To others, it’s a concern that the lost valuables under the ocean may be lost forever if not brought out. This is because the ship is getting deteriorated and eaten up underwater.

A conflict of concern and emotions seem to surface on this topic. One side said it will not be sold and will be in the display as it

As per the Independent news dated May 2014 Santa Maria was carrying loads of gold bars, silver. It is believed it had sunk nearby the Haitian coast on the 25th of December in the year 1492.

Frol de la mar was a Portuguese ship near the coast of Malaysia known as Malaca in the olden days. The treasure is worth 2.6 billion dollars with a value of 60 tons of gold.

The Grosvenor had a moving story

It is one of the ships by the East India Company that started its journey from the Southern Part of India known as Madras towards England. Due to a miscalculation, the ship met with an accident that put many people’s lives in danger. A total of what is believed to be 150 people including Men, women & children were on board the ship.

In the early morning at around 4:30 am it was smashed off the Lambasi Bay (South Africa) on the 4 th August 1792. The treasures from it were found by some, the end was sad yet with hope because the women survivors were not found except 3 white women with the natives out of which 2 were believed to have been the survivors of the ship.

SS Gairsoppa was loaded with silver along with other valuables

Gairsoppa was a cargo steamship. It was located off the coast of Ireland. However, you can’t look for this shipwreck underwater for a hunt. This is because the treasure that it sunk with has been recovered approximately around 109 tons of silver. However, when the ship had sunk they received a huge sum of money due to the insurance.

What do we understand through this underwater treasure chase?

To Put it in order for us to look for the treasures at the relevant places or whoever likes to go for treasure hunting underwater can check out this list of ships above if their local laws allows them to.

There are however many of the ships and boats that were loaded with treasures of many kinds some of us we know and many of which we aren’t really aware of. The reasons for many miscalculations and differences of opinions are also due to the change in the land structure.

Over the years we have been making even man-made islands and reclamations of small islands which made it difficult even more if there are no written pieces of evidences or known stories. There could be ships and boats that may have sunk with treasures in so many places it’s just that we don’t know the exact spot.

How many shipwrecks are there in the Ocean?

Unesco termed it as a time capsule. This term sits well with many of the shipwreck more the thousands of years old.

Just as we learn from the case of titanic that the ship is getting eaten up slow and would disintegrate slowly. We can imagine how many of those ships that sank into the deep ocean may have actually dissolved (i.e eaten up by the oceans)

The Most valuable treasures found out of the known discoveries of the sunken ships are as follows:

As per the Guardian, It was approx £1 billion worth of Gold this was from the Spanish galleon San Jose ship or could say famous Spanish fleet of 1715.  So far we do not have any other known sunken treasures found to date. Since San Jose was carrying Gold itself.

San Jose was found off the coast of Cartagena in Columbia. Just like the case of Nuestra senora de la Mercedes, even this issue was taken to the court over the ownership. Here however Colombia got the right to the items found.

Although we have the information of how much huge the treasure was. It is difficult to get the exact estimate until recovered and evaluated at the current price. Since one of the sources claims a different amount whereas other reputable sources have a different amount.

The point is that the treasure fleet here was rich and had valuables in it.

Nuestra Senora de la Mercedes sunk in 1804. This ship had 14 tons of cargo which consisted of several valuable items such as pesos, gold coins, silver plates, copper bars, canons, etc. The Spanish government on the suspicion of the announcement by the marine exploration firm in the media of transporting 500,000 gold & silver coins to the United States, Claimed it in the US court.

The case went to the United States District Court, Florida, Tampa Division and it was concluded that Odyssey had to return the cargo. It was in 2009 & It was also learnt the Odyssey named its find as ‘The Black Swan ‘.

SS Central America had lots of gold on board

Another interesting story is about Tommy G Thompson known as one of the excellent treasure hunters. It was believed that he had moved a pile of Gold to another spot in 1988.

This was from the Atlantic Ocean. It was believed that SS Central America was carrying at least 3 tons of gold from California to where it sunk in the South Carolina.

Esmeralda sank off the coast of Al Hallaniyah in Oman which is the southern part of Oman near Dhofar region. The ship was found with some artifacts that determined that it was actually Esmeralda of Vasco da Gama. It also had some form of artillery which showed that objectives and the purpose of this particular fleet.

What do you think of ethics, emotions, and moral values?

There may be plenty more sunken treasures hiding underwater to date. One can’t simply put the value to it since not all the ships were known and report to have sunk. Secondly, there were even pirate ships that may have sunk.

Those whose loved ones have departed from this world on account of accidents while travelling through the ship may think a bit differently. Emotions and moral values won’t allow some to think of going to the place where knowing that people have died there.

However, excitement, adrenaline rush, the need to earn the living, etc., are the issues that overlook emotions since these have strong emotions than the former since there is a hope of gaining something.

If you think that simply ocean floors have treasures then you may have to rethink because there are rivers and even lakes that could be possibly a treasure trove for enthusiasts or treasure hunters.