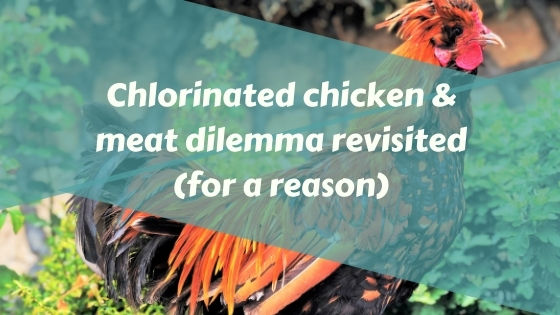 Why is a chlorinated chicken so much in talks?

It is known as a chlorinated chicken because of the following reason. Chlorine is used during the washing off the chicken meat. This procedure is carried out in order to protect consumers from the diseases that spread through the meat.

This issue raised a lot of questions due to the possibility of low animal welfare & poor hygiene conditions.

Is the same kind of chlorine added to swimming pools too?

Yes, we know that our swimming pools too have chlorine added in. If you remember we take bath after coming out of the swimming pool. This is to avoid having itchy skins, rashes, and many more reasons.

This question could pop in the head when you hear about chlorine-washed meat.

If chlorine is so good in the food then why is it washed off from the skin after swimming?

A study that found the relation between chlorine & severe illness

The American Journal of Epidemiology has an article based on the connection between Bladder cancer and Water Disinfection Byproducts through ingesting, bathing, showering and swimming in pools.

Most of which indicate inhalation or dermal absorption. Now, this has also a point which is exposure to Trihalomethanes (THMs) for the long term in the industrialized countries being more as compared to the village areas.

The results of the study state that the subjects that had the longest residence until 18 years was in the village & had a lower risk of bladder cancer compared to those in the metropolitan areas.

Why chemical rinsing process of meat is deemed safe for some?

It is noted that as per the European Food Safety Authority’s article dated 24 June 2015 we learn about the quantity of chlorine & its by-products. The quantity of Chlorine dioxide present in the chemical rinsing is so low that it can’t affect a person unless daily intake is above a certain level.

The report of the Risk assessment 2009 also showed in the executive summary that “some studies have suggested a possible link between DBPs and cancer”.

The British Regulators allow the combination of Chlorine dioxide, chlorate & chlorite to not exceed 0.5mg per liter as chlorine dioxide entering the water supply. The chlorinated chicken is said to have much lower concentrations than this.

Around 65 billion chickens in the US (the figure is from 2018). 9.2 billion broiler chickens produced weighing 58.3 billion pounds.

In the US in 2019 around 42.1 billion pounds of (broiler) chicken product was marketed (ready to cook). Americans eat more chicken than anywhere else in the entire world. The chlorine for the water. It is 4 mg per liter or 4 ppm are considered safe in drinking water.

It boils down to do we need or no. The choice is with the consumers. Not to leave them with less choice so as to make them buy. However, customers should have more options for them to decide what they want.

Chlorine is used for treating water against microorganisms. It is used to fight against a vast array of microorganisms. A study was published on Risk Assessment of Disinfectants in poultry chilled in Chlorine water dated 26 August 2009.

It shows that Chlorine is effective against Pathogens that are waterborne and foodborne along with Ecoli, Salmonella, Campylobacter, Shigella, norovirus & vibrio.

How is it different from Kosher meat?

Kosher meat is a meat that is slaughtered as per the guidelines of the Jewish scriptures. The blood drained, veins are removed and the meat is salted.

Administering Electric shock is prohibited before the shehitah (kosher) slaughtering. A Dead animal without slaughter is prohibited just like in the case of Halal meat.

In both Halal & Kosher process of slaughter, the animal or bird should not have any blemish or injury, it should be in a healthy condition.

How is this different from Halal meat?

Halal chicken is a process of slaughter whereas chlorinated chicken is the one that is washed with the chlorine. This is after the chicken is slaughtered.

Halal chicken or meat doesn’t leave a chance of such practices since there are set of rules that have to be followed & then certified. It’s not the case that all others might be unhygienic meat.

However, what we understand from this is that if we are given a choice of consuming a tablet (a pill) or eating organic healthy food and stay healthy. The very obvious is most of us would like to eat healthy food and not medicine.

In the UK this was not the case. This issue was very much in the news lately about the trade deal between the US and the UK.

Confusion between two points of views

We got confused between two different points of view one for and one against halal chicken.

Halal chicken is simply slaughtering the chicken in an Islamic manner prescribed by our creator.

Chlorinated chicken is something which is a rinsing process that is on the meat and not on the live chicken. Asking simply the Halal Certification Authorities in the UK clarified our point. HMC confirmed that they do not have chlorinated chicken.

If by law the procedure is to rinse then it is quite obvious the industry has to follow it. However, in countries where there isn’t a compulsion then it is up to the companies or the processing plants to use this procedure or not.

The confusion is when people knowingly or unknowingly import products that are chemically rinsed. It may possibly not be meat. It doesn’t serve the purpose because they have been consuming what they don’t want.

Why the US has been using Chlorinated chicken?

In order to avoid contracting any serious infections such as salmonella etc, this procedure was put in place.

What are the best possible solutions from chlorinated chicken?

Halal or kosher meat is the best possible solution. However, This process is possibly outside of these authorities since they certify the products to be Halal or Kosher. The process of rinsing meat with disinfectant could be with the Butchering facility or processing plants.

Some of them may have this process under their control if they carryout the processing of the meat too. However, as per our investigation we learnt that this process is outside of their function, a few may oversee the process.

Monique Goyens Director General of BEUC in her BEUC blog article dated 14 July 2014 mentioned something that we can relate to a lot. Especially since we don’t want chemicals to go in our bodies- here’s how it goes-

“Let’s be clear – no chemical rinse will ever remove all bacteria from meat heavily contaminated as a result of poor hygiene.”

She had a point there and we totally agree with it.

From our research on this issue, we understand that emphasis on preventing chicken at each step from getting contaminated is more important.

In the UK, what we learn is food production of chicken is like farm to fork and not cleaning up the chicken in the end.

In fact, the progress of food hygiene & the reduction of food poisoning related bacteria can be clearly seen. As we increase our hygiene standards our cases go down even further.

In this regard, it is important to learn certain terms used one of which is AMR. AMR stands for Antimicrobial Resistance. Those bacteria which can resist the antibiotics and survive in spite of it are having this AMR.

For the last couple of years, this has been a concerning thing we say in terms of the other viruses also.

This means the food industry and the human health care industries try to save us & our food from harmful bacteria they use antibiotics.

However, while the use of antibiotics now these bacteria try to resist and such issue is known as AMR (Antimicrobial resistance)

How we should handle meat is also advised by the FSA

A point such as Meat has to be kept at the bottom of the fridge and not on top since the juices can run down and contaminate other items.

Simple things like washing of the hands with soap & warm water after you handle meat. Those of you who work in the food industry may be aware of these practices for food safety and hygiene.

The Cooking of the chicken should be thoroughly and not under cooking. We talked about this when I mentioned about the avian bird flu.

Here we see the common factor is cleanliness and proper thorough cooked food. Keeping best practices has helped us all in reducing the risk of AMR bacteria-related infections.

Many People in the US already have had chlorine-washed chicken. One must say this, but the fact the two different points of view although having the same concern do not solve the issue of public health.

It is noted that personally keeping ourselves and our food hygiene at the forefront has helped us & to date it helps.

Even the recommendations given by the authorities somewhere try to put the same point but with two different viewpoints.

The question of whether halal chicken is chlorinated or not could only be answered by the Halal Monitoring & certification authorities.

As per the Email reply by HMC it was confirmed that they do not have chlorinated chicken.

Should there be a fresh test on Chlorine washed food products?

The whole purpose is if the connection and the number of cases of a specific disease or illness among the people that consume chlorinated meat or non chlorinated meat is established then it could create a fresh debate on the effects.

The test results could be non biased if the amount of chlorine or DBPs (Disinfection Byproducts) they usually consume is totally different from the other set of people.

There are various & mixed point of views on chlorinated meat