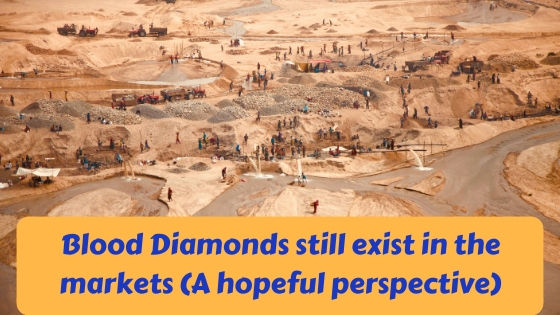 Blood diamonds are the diamonds that are mined in the war zones. People are bribed, forced and also killed and mutilated in such places. At times due to the rebels fighting against the government but innocent civilians get targeted & exploited.
May it be Central African Republic, Zimbabwe or any other place of war? It is due to the mining of these diamonds that people lose their lives or even get crippled.
For some diamonds, they could get just a couple of dollars at times $40 to anything based on the size of the diamonds. Normally we see that the militias used this to create a civil war.
We saw that in the movie also called blood diamond. A blood diamond is connected to the exploitation of the people. Not many of us think before we buy any precious stone for our loved ones and think where it really came from.

As per Britannica the UN definition of blood diamond was formed in 1990’s. But what we can understand from the name and the actions of the people is that this conflict gems and precious stones is a lot older than the time period mentioned. If we simply remember the Gold rush era then we can easily understand.

Countries that were connected to the Blood diamonds

African countries such as Central African Republic, Democratic Republic of Congo, Sierra Leone, Zimbabwe, Angola were mainly in the forefront of these issues. They were much in the news on issue connected to the troubles happening in there.

The point is not simply about these countries alone. Even Myanmar had a similar issue. Although there wasn’t any case heard of its majority but it is also linked with the genocide it committed towards its own Rohingya people.

What percentage of Ruby mines are owned by the state in Myanmar?

There was a change in the law in Myanmar because of which lot of gem hunters started to hunt for gems. However, this has been going on by women & children for ages. Also, that Private firms partner up with the state to mine for rubies. There is no specific percentage known at this moment which allows people to know the percentage.

How do blood diamonds affect the environment?

Blood diamonds, in fact, any diamond mining in this regard if not monitored from the environmental aspect of it can damage the soil. It could create soil erosion & land slides due to the water being a constant requirement to extract these precious stones.

Waterborne diseases are more likely to impact the people since the water stays stagnant in one place after used in the process. Leading to mosquitoes and other insects. Health and well being of the people are compromised due to them working long hours only so they could find some precious stone & only then they can get paid.

The condition of people under blood diamond zones

DRC diamonds are also one of the links in the chain. It is believed that the diamonds from the CAR (Central African Republic) also makes its way into DRC (Democratic Republic of Congo). According to an article that was published on a story of Congo in the Time we get a good insight into the backdrop of the scene in the conflict diamond zone.

It very brilliantly mentioned the state of the workers in the mining field. The way they work & also get paid. Golden nuggets I get from this story is that mine workers work from morn to evening for low pay. In fact, it’s only when they find a stone and in fact out of that also they get a percentage of the percentage.

The story also sheds light on how it’s difficult to trace the origins of the diamond once it’s cut. The diamonds change hands almost eight to ten times from the country of export to the destination. That the teachers ask for money from the student to make up for their low income, hence parents would prefer to send them to the mines.

The issue of child labour still makes its place in these circumstances.

Yes, they are bad. People have been badly affected. Child labour, Murders, accidents & severe injuries are part of this industry. They are also known as conflict diamonds.

Burma is one of the places where more than 90% of rubies come from which is now known as Myanmar. This is where the military government that controls the sales of gems too. At one of the privately-owned mines at the foot of it women and children also look for these rubies. Although the rubies found by them are small, it still makes a difference. They are able to own them and sell them too.

It’s a game of Greed both for merchants and the governments in the conflict zone. We came across a clear proof of pressure on the whistle blower journalist in one of the African countries who was given a jail term when he mentioned about the issues of conflict in the diamond fields.

Kimberley Process is a certification scheme. In other words its Kimberley process certification scheme (KPCS). It was enforced in 2003. The whole initiation had started in 2000 by the United Nations General Assembly. So in 2002 Governments, international Diamond industry & civil society organizations produced KPCS.
This process has made the members authorize them to certify this cargo of rough diamonds as free of any conflicts. This is to prevent any illegal and blood diamonds entering the legitimate diamond market.
It is up to us as customers to know if we really need them in spite of the fact that bribery and corruption is also a part of many countries. Things are worked around easily if the present ruling party is corrupt in that country and uses deception to betray the international bodies that trust them and take their word for it.

Alternatives to buying our precious stones rather than conflict zones?

Up until late we have been hearing only about Burmese ruby, however, the place that can give a competition is also discovered. Green land looks like is going to be the new & upcoming star in the rubies market.
I expect Greenland to dominate almost in this industry. The reason being there is not many people crowding. Secondly, there is no issue with Blood rubies like Burma (Myanmar). People would love to buy items if they know that the item they are buying is not connected to anybody’s blood or has caused any trouble in the life of the people.
Along with Greenland, even Mozambique has rubies mine where in fact rubies an easily visible in certain areas. For more information also know that Rubies are also found in the Green land. Look for the Green land ruby.

From all the short films documentaries and research articles that I came across one thing in common. The common thing is that everything is possible if the crookedness is present among the authorities and the majority in this chain.
The blood, black & grey could be turned in to clean and transparent for the end customers. Until the peace gets restored in such zones it is nearly impossible to get this horrible blood diamond industry to halt.
If the corrupt government of the host country is involved then they could make the whole wrong thing into and legitimate business.

Conclusion on this issue

The solution I believe is more likely to work is buying from no-conflict zones. It has not been widely popular but there are gems and diamonds even in western countries where these issues don’t come up.
The one that I came across is the largest diamond mine (Diavik diamond mine) in Canada. Even Greenland, Russia (Mir Mine) is a good option if you want to purchase these stones. Semi-precious stones are even found in the UK. In fact, Russia falls into the list of one of the largest diamond producers in the world including Canada.
People can opt for such places too, it could also help the local business as it would be more local to you.
Also that many such conflict areas authorities would want to come out of such tags & have been working over the years now but it can’t be a complete success until it actually paid attention to how it should.