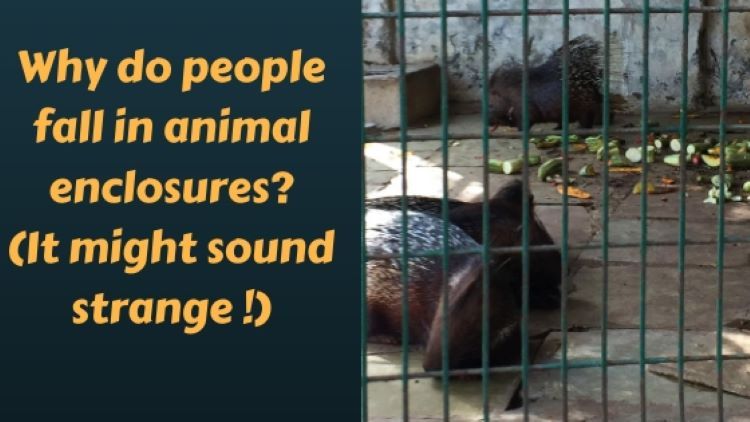 We have seen over the years this trend to be on the rise. It was quite rare a couple of decades ago. Not to forget if there was a similar incident happened long ago there weren’t many platforms for the people to know.

This, however, has changed the outlook and blame game has been started. Who is right and who’s not? The reply to this is not as simple. Many points we see do make sense.

In this article we are going to see both sides. Here, we have decided to put across as many points as we possibly can. Leaving the decision up to the matter of discussion for experts in their related fields.

Is it a selfie craze that leads to falling into the animal cage?

Many of us might think this could be the case. However, we see a variety of incidents taking place all over the world. Not all are associated with the selfie craze.

Social media has been one of the factors for some that are easily affected by what’s online. The Top 3 countries that have most Selfie related deaths are India, Russia & US and most of them being men under 30’s.

This study was conducted between 2011- 2017. Hence, the figures might have changed during the last 2 years. Based on the improving safety measures of not allowing people to take a selfie in certain places & make it a no selfie zone.

People that fell in the animal enclosures

They are of various age ranges, the youngest being 2years old. Most of the victims are kids that loose the track and end of falling off the railing. Lately, we have also come across school & college students also ending up falling into the animal enclosure.

The Youngest person we found that fell in an animal enclosure, recorded was 2 years old boy that fell in the wild dog’s enclosure in 2012.

A similar news report was revealed in the US as per nbcnews we came to know about a girl aged 2 fell into the Florida zoo this year in January 2019. However, she was saved as she was pulled out.

Observed behaviours noted as the reason for such actions

The following are the factors that have been observed so far that lead people to either fall in the animal enclosure or be in close proximity to the animal’s cage.

One may call some behaviour of adults as overconfidence or foolishness. However, there is always something at the back of the mind of the people that enter the enclosure.

There are two behavioural actions noted of people

The accidents that happen in an animal safari are completely different than those that happen in a zoo. Accidents happen anytime and precautions are in place to help avoid mishaps as much as possible.

Would you call it Safety, awareness or irresponsibility ?

One can not simply overlook safety. However, we can’t avoid being aware of where we are visiting. Simply knowing what can happen if a person falls in should make us think before taking any actions. As we go along things around us change.

Incidents happen which we had never thought of even in a zoo where 100’s and even thousands of people visiting every now and then. Which idea are we going to undertake as a safety measure?

Are we going to have humans in the cage where wild animals roam freely just like a Chilean zoo? Maybe we will be able to install a human cage as they thought in New Delhi zoo in India after the serious incident took place.

Do people simply neglect their duty at the zoo? Depending upon a country and people, the guards have to be on the front foot all the time.

Do we think this kind of accidents will not happen again?

Some of us might think it has just happened in other places and it can’t happen in your local zoo. Maybe you are right! Or maybe not!

Can we call it arrogance, ego or simply don’t care attitude. It may sound like a rant, although it isn’t. It can happen in any case. For decades now we have seen animals attacking people. Many times it’s due to the way they are kept, fed and treated.

Animal behaviour changes in captivity. This has been visible by the way they react. Some of us have seen lions moving around right and left endlessly. Also, we may have come across monkeys behaving in an angry manner by shaking the cages.

Certain private zoos that are not big enough, actually makes it difficult for the safety measures to be truly implemented. This statement, however, is not pointed to any specific country. You may know your local private zoo that is not very huge and animals may not be comfortable there.

Injured due to the close proximity to the enclosures

Note that the zoo has specific guidelines that they need to adhere to by the local or national government authorities based on the country they may be in. If they are all private, then still there are some universal guidelines you can get online

There have been instances where zookeepers have been mauled by the wild animals. You can’t say it has not happened in my country. My local zoo is too safe is an overstatement. Accidents can happen in the blink of an eye.

Incidents like this have taken place in the USA, Australia, India, China, South Africa.

Certain countries allow you to have a private zoo and probably some of them may not want you to have it if it’s an authority’s restriction.

What is it that still makes people want to be a zookeeper and risk their life?

Risk is involved everywhere. Even walking on the road or bathing at home all of this would involve risk and people do get affected by it. Being a zookeeper is about the interest and passion, just like any other profession. The Passion to love and care about animals & birds and help them. Know their behaviours when they are happy and when upset.

Who are you going to blame?

Incidents are many but each has their circumstances. A kid falling off the cliff into an animal enclosure by mistake is not his fault. They are kids we should keep kids with us all times while visiting such places. It’s a Very direct question many of us may not like it, so apologies for that in advance. However, this needed to be addressed sooner than later.

Just a couple of years back we came across an incident at Badaling Wildlife World (China) where a lady simply came out of the car in a safari and A tiger attacked her. Who is to blame here? The lady had survived but had started to receive taunts from public. South China Morning Post had a full coverage on what the lady had to go through.

We are all different individuals

The question of where will it ever happen again doesn’t have a final answer. This is because it can happen anywhere. The main point is for the zoo authorities to keep these instance in mind and then take the steps to eradicate it. Such as not way a visitor can ever try to climb down to pick a hat or anything that falls off.

Secondly, there are guards around and they should be there with a CCTV near especially wild animal cages, so they can keep an eye. The Third is that human cage availability in case if someone still happens to climb in.

An awareness video should be played for the people or at least safety announcement should be on all the time in the zoo. So, the people are aware and how they can alert the authorities to take action as well. In fact,  many zoo’s have security warning signs. Still, people do not pay attention and accidents do take place.

Safety Alarm should be possibly placed outside every cage for the visitors to press one that alarms guards. The second that could release a bait so the animal leaves the human gets distracted with something else.

Please Note: These suggestions may already be in place in some of the zoos however in many other places it’s not even thought of hence.

If you think I have missed out some important tip then email us and let us know. So, we can add your suggestion too.