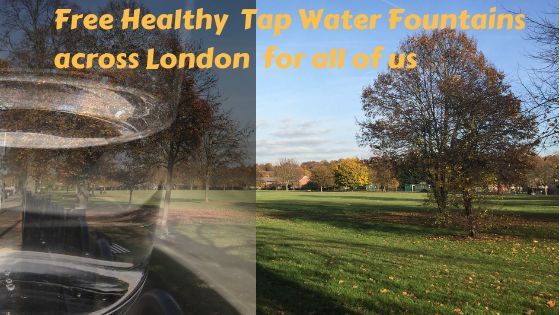 With The Summer’s Heatwave all over the UK, we get a good news of Free Healthy Tap Water Fountains in London. It was a much needed step of allowing people to get drinking water through public water fountains. However, we in London especially didn’t had as many and the only ones we could access were in some corner of big Parks such as Hyde Park, Richmond Park etc,. This means now you don’t need to buy a sugary fizzy drink all the time if you are thirsty while traveling across the city.

MIW the water cooler experts in collaboration with Mayor of London Sadiq Khan has Partnered up with the Water Company Thames Water so we could get even more than 100 Water Fountains. With the fund of £5 million and an aim to provide healthy tap water fountains across busy areas of  London is a brilliant step. This was needed especially when there are people out and about for Shopping and site seeing across London. Not only this helps the tourists but it is a best move in Years even for the residents.

The Benefit of having such a decision is that we are going to save a lot of Money because of NOT buying new bottles every time we visit the city. The Good news for UK is that we are going to produce less plastic waste then before. The Water fountain Installation is made of high quality marine grade stainless steel. This means it can withstand harsh winters and hot summers. MIW has also been in collaboration with 2 more campaigns one was Oneless and other #taptastic.

The Following Tweet was by Thames Water with a good news 🙂

Your Friday has just got better… Not only is the weekend here, but so is our brand new water #fountains 💧 Help us in the fight against plastics, and enjoy our world-class tap water. Just look for the drop and refill your water bottle today! #TapTasticNotPlastic pic.twitter.com/aJn4IWhhzS

This is because people are not going to buy single use plastic drinking water bottles as much. Buying a reusable drinking bottles would help us all by saving our environment. This is a great achievement as far as reducing the plastic waste is concerned.

Places like New Malden High Street, Victoria Road, Elm Road & Tolworth Broadway  are the Fountain Locations. We will update the information as & when it will be available.  It’s a matter of joy for those also who go for Cycling, running or Jogging in and around these areas. You don’t have to get a single use plastic bottles anymore. Simply refill your reusable thermos bottles or you can even buy it online.

Thames water will own and maintain the Water fountains for  25 years minimum. Refill has more than 20,000 refill stations across UK. Refill movement was a charity city to Sea initiative by an environment Campaigner Natalie Fee in 2015.

One step closer to achieving our low carbon footprint

Refill also has an app which could be used to figure out the tap water fountains in the area you may be.  This could be downloaded both on Android as well as Google play. The Question is  are we going to be able to manage to access Refills on all the major London underground stations also all the major bus stations. You should check out their App which could give you this data.

The Change will make us all well hydrated at least it can be said to be a boon if you are with kids. As they tend to get thirsty sooner than adults. Once there is water there comes a need to go to the toilet. Just wondering if we going to have enough WC’s (Water Closet) in other words Toilets across everywhere.

In a press release dated 18 th of July 2019  It mentioned about 50 New Locations for the Water Fountains were also disclosed by the Mayor. This also includes 20 rail as well as underground stations. While Natalie Fee who is the founder of City to Sea mentioned that these ‘New Fountains will be an addition to the exiting 2500 refilling stations in London already’.