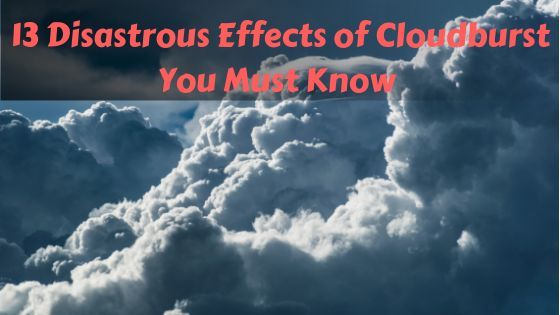 How does a cloudburst occur?

Clouds as we all know are formed as the water vapourises in the atmosphere. Cloudburst is caused due to the new warm clouds pushing the existing layer of clouds upwards. The phenomenon where existing vapour is taken upwards due to the warm air restricting the fall. Making no way for those drops to come down, the new drops form. Due to the heavy load as the air goes still the clouds can’t take it anymore of the existing situation and they burst a lot of water in a small area. This could be like a big waterfall. It creates a lot of damage to the human life, property & livestock.

The same patterns increase could be the reason for similar type of disaster happening. It cannot be predicted with accuracy. Although flood warning in a way can be taken as cloudburst warning too. This situation often seems to have been taking place more in the cold and mountainous regions. Clouds have different density and appearance. They can be differentiated based on their appearance and there is a way to know types of clouds. You could also get a pretty good information on identifying clouds through your local weather sites as well (Met Office, 2019).

There are more 3 types of clouds that float up at the highest and they are as follows.

Out of all there are one type of clouds that can grow from low to the highest altitude and they are called Cumulonimbus. Generally these are the clouds that are seen to be growing huge it can go up to  almost 50,000 feet high. They look huge in formation.

In places such as mountains surrounding the area in the center leads to the gathering of the clouds that enter and as the warm air also tries to get in, it lifts up the cold clouds as mentioned above. Basically this type of clouds, as they turn in a humongous size, they store a lot of water but it has a limit as well.

These are Terrifying Effects of the cloudburst

Imagine being in the middle of a cloudburst and you are all by yourself ! Even for the emergency rescue team to come over. It may take several hours to reach you. On the contrary if your phone signal is not working then emergency numbers could work but if the battery is not enough then it can be really tough for you to even call the emergency services.

Challenge around the solution of cloudburst affected areas

Major issues is the infrastructure that is a hindrance in the mountainous regions. It is one of the reasons also for the warning systems to be in proper place. Although Cloudburst has also taken place away from mountainous region, since the clouds are vastly spread out. Even a country like UK has had its fare share of cloudbursts in the history and many other countries have had to face it.

The video below shows the massive cloudburst from the cumulonimbus clouds straight from an aeroplane.

How can we prevent cloudburst?

There is no way you could prevent this but you can be warned to take shelter. Cloudburst can cause flash floods in an instant without people realizing the speed at which it could happen. The water would so fast that it can not give you much time to think and get to take necessary action. Being under the shelter could always help. Cloudburst could not only be in the form of rain but it could be hale as well as rain . Making it all the more terrible for a person to escape.

Precautionary measures we can take includes

Keeping up to date with the weather warnings. Having inflatables at home also having ropes can help. Consequently have a sustainable energy supply could be very useful. Due to the heavy rainfall many a times the electricity could be down. Having solar or wind energy could help. At the same time due to the storm or heavy cloudburst these could be badly affected too.  There is a reason why a blackout takes place especially when there is floods or heavy rainfall even storms.

If you check the whether channel you could learn that during the natural disasters it could be dangerous to turn on the electrical. As there is a risk of shock circuit many lives could be affected by it. One Radar could detect the possibility of cloudburst, which is a Doppler radar ( since it used in weather forecasting)

Does climate change cause cloudburst

Climate change has been linked by also to the cloudburst just as any natural disasters have been linked to it. The intensity and frequency of these disasters have gone high. You could see this in the following video. Affected countries are majorly the South East Asia.

Houses nearby the mountain valleys are more affected and in danger due to the landslides. Same is the cause if the water level of the river increases quickly the nearby houses could get totally destroyed and swept away in floods. A cloudburst caused landslide In a recent news update as mentioned above.

We learnt that Pakistan was one of the places to get a cloudburst in a place called Nelum valley even India & Bangladesh also got affected by heavy rains.  Being aware of the surrounding always helps. How to administer first aid and help others once you deem it to be safe. These are some of the important parts and parcel of these events.

This could only including awareness and staying in a safe place. With a strong building infrastructure. Another option includes knowing where cloudburst happens often and install a underground reservoirs to hold the water just as Japan uses in the monsoon season. This can be later used as a source of fresh water after going through the water treatment & checks.

Cloudburst can trigger the flash flood operation actions which can be a gift if utilized appropriately.