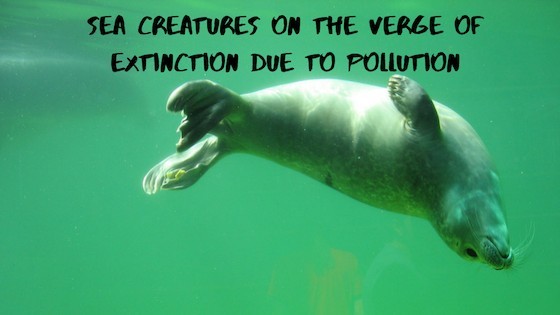 Water creatures on the verge of extinction due to water pollution

A symbol of peace and tranquility, the vast oceans and seas around the world have always been enamored by humans. But, excessive misuse and exploitation of the oceans has affected its inhabitants bringing several marine animals on the verge of extinction.

From seals and seabirds to even fish, aquatic species are dying because of deadly environmental concerns and water pollution. In a bid to emphasize the relevance of these animals below the water, the theme for 2019’s World Wildlife day was, “Life below water: for People and Planet”.  The president of the UN General Assembly highlighted the unimaginable amounts of pollutants and plastics ingested within the holy waters and how they affect ‘marine ecosystems, marine wildlife, and biodiversity’. Unlike animals on the surface of land, marine organisms are more difficult to trace making it harder to understand the threats they face.

With over 13 million metric tons of plastic dumped into oceans, 800 species of marine animals have some sort of interaction with human-made debris out of which 80 percent comprises only plastic waste. According to the International Union for Conservation of Nature Red List, 17 percent of these listed species possess certain degree of vulnerability to extinction which proves to be a key issue requiring the world’s attention.

We have collated some of the oceanic creatures that have increasingly been victimized due to water pollution bringing them on the brink of extinction.

Sea creatures on the verge of extinction

For several years now, the sea turtles have been vulnerable creatures of the oceans. Waters filled with plastic twines, nylon fishing lines, plastic packaging, petroleum by- products and other debris cause sea turtles to suffer either through ingestion and entanglement, which sometimes make them lose their legs or even lead to death. Chemical pollutants also weaken sea turtles’ immune systems, making them prone to diseases. Research suggests that at least 52% of the seven species of sea turtles across the world have ingested plastic debris within their lifetime making them vulnerable, endangered or critically endangered by the IUCN.

With percentile varying in different regions 100% of sea turtles in coastal Brazil have traces of plastic and atleast 80% of juvenile loggerheads in Western Mediterranean have ingested plastic while eating. Especially found in coral reefs, the Hawksbill species of sea turtles which reside in the tropical expanses, have said to have a decline of 80% in the past century because of the above mentioned reasons. Water pollution and smuggling of their shells for trade purposes have endangered these species causing degradation of coral reefs which these turtles feed on. Having survived for millions of years, Hawksbill turtles are crucial for the existence of seagrass and coral reefs as they eventually affect the whole ecosystem.

Apart from the Hawksbill species, the Loggerhead turtles and the Kemps Ridley turtles also come under the critically endangered list of IUCN, just step away from being extinct. Plastic ingestion blocking their digestive tracts, loss of habitat, entanglement of fishing nets and bands are some factors that affect their lifespan. As Kemp Ridley’s have a distinctive way of laying eggs, these issues majorly affect their reproduction process which is in turn leading them closer to extinction.

More often than not sea birds are seen entangled in plastic rubbish or with stomachs filled with plastic waste. Mistaking unwanted garbage for food, these birds are unable to chew and digest the plastic waste, leading to starvation. Among the 40 endangered species within the within the IUCN Red List of Threatened Species, the Layson Albatross is one of the hugely affected sea birds whose hunting techniques of scanning the ocean surface with their beaks for food leads to picking up unnecessary plastic. Research also suggests that 98% of studied Albatross have taken in plastic that obstructs their digestive tract causing internal damage and leading to their deaths.

What will you do to help reduce marine debris & protect animals like Hawaiian monk seals? Ideas: https://t.co/3DIslErikh #MarineDebrisWeek pic.twitter.com/oj1jbDKPv6

Residing in tropical beaches, the Hawaiian Monk seals are marine mammals which have been vastly affected by plastic debris in the seas and oceans. Unlike its counterparts, these seals live in warm beaches, popular at local zoos and known for their friendly mannerisms. Fascinated by plastic bands and rubber bands, these monk seals suffer severe infections when they get wrapped by bands sometimes succumbing to death. Entanglements of juveniles in fishing nets, starvation due to reduced preys are some other sources for the decreasing number of this species of monk seals. Treading towards doom, there are only 1,400 no eared monk seals remaining in the Northwestern Hawaiian Islands.

These large marine mammals also known as ‘sea cows’  survive on sea grass and play a crucial role in maintaining the food chain and ecosystem. Despite not having predators these giant sea creatures are endangered with new developments along waterways damaging their natural nesting habitat.  Sewage, manure, and fertilizer run-off enters the water and causes algal blooms which often contain toxic pollutants and can kill manatees if they eat it. The chemical pollution that travels into manatee habitats has now impaired their immune system thus putting them at risk within waters. The pesticides and herbicides present within the waters also tips to their untimely death that has gradually led to them being endangered.

Similar to other marine mammals, whales are oceanic species susceptible to the human debris clogged in our oceans. These extra-large fish mistake plastic for food and unintentionally take in plastic garbage in their huge mouths which cause extreme cases. Studies also prove that hundreds of cetaceans have been affected by plastic pollution in water and 21% of those cetaceans face extreme threat to life. The IUCN‘s 2016 data also showed that the global population of the Blue Whale has decreased merely between 10,000-25000 highlighting the need to conserve these mammals which play a significant role in marinating balance within the ecosystem.

The rise of plastics in the oceans is proportionately leading to the decline of marine life; with proof by scientists who have already predicted the overweight of plastic to fish by 2050. A report by the WWF International director stated, “humanity is collectively mismanaging the ocean to the brink of collapse,” which sums up the erroneous treatment of mankind towards its marine environment. Plastics encourage growth of pathogens in the ocean, corals that come into contact with plastic have an 89 percent chance of contracting disease, compared with 4 percent likelihood for corals that do not. This influences the marine animals which feed and survive on these corals thus disturbing the entire chain.

Marine species such as the manatees eat a lot of seagrass, aiding in keeping the grass short, which helps maintain the health of the seagrass beds. Extinction of the manatees will affect the health of seagrass beds breaking the whole marine ecosystem. While these may be just a few examples of the effects of water pollution extreme steps need to be taken to curb the use of plastic around the world, a product which threatens the breakage of our entire ecology.