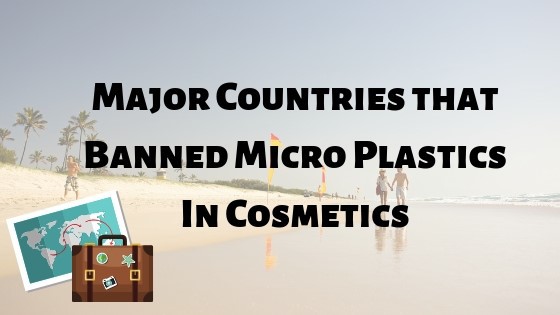 BAN ON MICROPLASTIC IN COSMETICS

With it’s unimaginable impact on marine life, the minute microbeads have caused a major stir around the world in the past few years. Acting as exfoliators and cleansing agents, these non-biodegradable 0.5 mm particles are usually present in personal care and cosmetic products which after being washed down the drain have extremely harmful effects on our seas and oceans.

According to a CNN report, the United Nations Environment Programme has already notified the world  about the eight million tons of plastic which end up in oceans each year which may lead to more plastic than fish by around 2050. Plastic pollution has always been a hazard with microbeads being major contributors in disrupting marine life and the food chain. After transferring toxic chemicals in marine organisms the microbeads ultimately enter into animals that eat sea creatures, which includes us humans, thus affecting the entire ecosystem. This is one of the reasons why the ban of microbeads in skincare and cosmetic products has been paramount.

THE FIRST STEPS TOWARDS CHANGE

Although the finish line is far away, the last three years has seen a significant change with many countries initiating ban on the lethal agent which is spoiling our waters. Beginning with campaigns like ‘Beat the Microbead’ which is supported by over 100 NGO’s from across the world, many nations have now taken serious cognizance toward the microbead problem. Starting from the United States Microbead-Free Waters Act (2015) to countries like France, Canada, New Zealand, India and the recent prohibition by the U.K which took effect in early 2018, we take a look at the implementation and effect of the microbead ban in various countries.

📣#EUHaveYourSay on a restriction proposal to ban intentionally added #microplastics in consumer and professional products. The restriction would help to avoid the release into the environment of approximately 400.000 tonnes of microplastics over the 20 year period if adopted.

Following the ban, big brands like Johnson and Johnson, Procter & Gamble, Unilever, L’oreal started to phase out the use of microbead from their production line. Nevertheless, this left out hundreds of other companies which run in the market without FDA approvals and don’t provide an account of the detailed list of ingredients in their products making it impossible for them to name and shame apart from firms using microbead products such as detergents and other stay-on cosmetics. The implementation of the U.S ban had its positives and opened discussion to several other countries pushing for the ban, but also underscored the lack of specificity in the legislation which campaigners used as a learning lesson in other countries such as the United Kingdom.

The UK ban on microbead manufacture is a big step for #CleanSeas 🌊
Here’s what you should know about microplastics. pic.twitter.com/vucKa4MK9d

In 2018, The UK based Cosmetic, Toiletry and Perfumery Association (CTPA), also proudly stated in a BBC report that the presence of microplastic in rinse-off products was “virtually zero”. The claim was made after the voluntary planning of cosmetic manufacturers to work on the removal of the microbeads since 2015. Despite criticism of leaving out products like sun creams and lipsticks which are now designed to wash off, the U.K. ban has been a major step for the Government, which has been making colossal efforts to ‘eliminate all avoidable plastic waste’ by 2042.

The small stature of the plastic particles is not designed to be filtered in the sewage treatment making them much more dangerous than the larger particles which are often reused and recycled. Despite being slow the absolute termination of micro beads will become a landmark movement which will lead to the end its negative impact on the environment.

ALTERNATIVES FOR THE TROUBLESOME MICROPLASTIC

Polluting our waters on a daily basis, the environmental organization Greenpeace has found that, a single plastic particle can absorb up to one million times more toxic chemicals than the water around it. So, while the microplastic is considered a major scientific invention its natural alternatives like apricot pit, cocoa husks which have been adopted  by big names like Burt’s Bees and St. Ives is being accepted as a positive move. The ban of these plastic microbeads has also directed scientists to create microbeads from cellulose, developed from a renewable source apart from being easily degradable into sugars.

While the rules and bans across different nations seem to be stringent and valuable, there are several concerns that require to be addressed. Some activists continue to debate the efficacy of even the biodegradable microbeads as there is no evidence of them integrating within the oceans. Apart from this issue, the overall ban of plastic microbeads is a mere start to culminate the large scale plastic problem entering and destroying the marine environment.

The European Parliament wants to ban microplastics in cosmetics