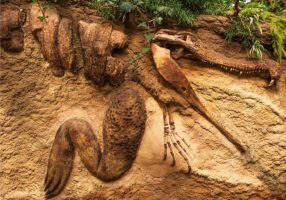 Water dinosaurs were really fascinating sea creatures that will make you imagine the period in which they lived. These dinosaurs and water reptiles  were monstrous looking existed millions of years ago. Many of them do belong to the same family of reptiles. They adapted themselves and lived until they became victim of major extinction of these creatures due to the natural calamity.

Some scientists also believe that the birds with hollow bones are the flying dinosaurs that evolved. There are scientists that say one of the Carnivorous dinosaur was not as tall as it is portrayed in the movies. It could have been looking like an angry chicken. It makes me think, how the point of views of the researchers change as and when a new truth is uncovered.

From the largest of them to the smallest you will be able to see them as you read along.

These were dinosaurs or just prehistoric sea monsters  lets take a look at each and find out more about them.

As the continents started to shift  a some of the creatures that used to fear their life had a chance of being safe. Also, we find a whole set of Skeletal remains of these dinosaurs in different parts of the world now. Places such as India, Chile, China, North America, Spain, Morocco and various other countries have the remains of these monstrous sea creatures too.

It was Mesozoic Era that had all the 3 periods that witnessed a huge set of top predators in their food chain roaming on the face of the Earth.

These time periods may differ based on each source that mentions it. The best sources are National history museum, but also live science has some of this information. For research purposes its better to look in to the journals. There are plenty of our Earth surface which is still not explored that is under the sea. As majority of our world has now 75% of water.

The question is If we evolved from Ape why do we still find Apes around us?

If they were the sea creatures which evolved and then it started to develop into other animals and birds then how come humans have not evolved after forming into humans. A lot of changes are happening  but no adaptability. If adapting to the enviroment around us was the survival of us then there should have been a lot of people survived and still living even in the North and South Poles.

It is a Mystery

It really is a mystery how we have evolved. There is no confirmation of the theory of evolution as it is a theory. I am sure many would not agree to me but as we explore the internet we can find a lot of proof that doesn’t support the theory of evolution. There can’t be a discussion about water dinosaurs and forgetting about Loch ness Monster. If that was still alive as many people do believe than which dinosaur family do you think it could be from.

The following are the Sea monsters that I mentioned above.

Prehistoric sea monsters known as plesiosaurs came in all shapes and sizes, with some species sporting the longest necks in the oceans. Far from creatures of fantasy, these underwater titans ruled the deep for millions of years https://t.co/hDSgnvuZYH

Dakosaurus is an extinct genus within the family Metriorhynchidae that lived during the Late Jurassic and Early Cretaceous. It was large carnivore that spent much, if not all, its life out at sea. #SlashProtectAnimals #SlashWildLife 🐾 pic.twitter.com/s7mKA7UilS

Good evening everyone! Tonight’s dino of the day is shonisaurus! Shonisaurus wasn’t a dinosaur but a member of a group of marine reptiles called ichthyosaurs. It lived during the triassic period in prehistoric North America and grew to 50 feet long. See you explorers tomorrow!🤠 pic.twitter.com/PQKuOcaq1f

Shastasaurus was the largest ichthyosaur & largest marine reptile ever, measuring an incredible 21 metres in length! They lived during the Triassic.

Some Interesting fact about these water dinosaurs and sea monsters

We have seen some sea dinosaurs that had long necks like Nothosaurus, Pliosaurus, Elasmosaurus and the Spinasaurus. Dunkleosteus didn’t had teeth but they had boney Plates that used to rub against each other and get sharp just as the knife is sharpened.

Dinosaurs roamed the earth surface and these sea monsters under the sea.  The one that are mentioned as sea dinosaurs were not just underwater except a few. Spinasaurus is one of those that could be on the land too and the Tanistropheus.  Sarcocuchus was a super crocodile that of course also roamed on the land and under the water.

The fact that the oxygen level during these times were in huge quantities was due to the forests and the climate. This allowed most of the creatures to grow bigger and bigger. There were experiment done on bugs during the recent years. It was clear from these bugs also when they were grown up in different percentage of oxygen levels was that they grew bigger than normal on high oxygen concentration. However, this was done on bugs and we do not have evidence of whether it could work on reptiles as well.

Water monsters mentioned above must have been great swimmers too due to their vulnerability of becoming a prey to other similar monsters.

There are way more sea dinosaurs that we still haven’t discovered yet. Wait until more discoveries come up as we go along. Please comment if you like to let others know and also let us know what kind of water dinosaur is the most scary.